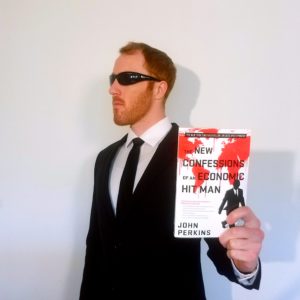 John Perkins is an economic hitman. He spent over a decade pressuring the presidents of poor countries into signing exorbitant contracts with major US construction companies (think Halliburton and Bechtel) that were financed by major international banks (think Goldman Sachs and JP Morgan.) In theory, these agreements were supposed help underdeveloped countries export their natural resources and create wealth for their economy. This wealth would then ostensibly go towards building schools, hospitals, and other important social projects for the people and thus raise them out of poverty. What these countries didn’t realize was that they had been sold a lie. The money they made was never enough to pay back the massive loans they had agreed to and they were left helpless as they watched the interest continue to rise and the money continue to leave. Time and time again the profits went back to the big American banks and companies while the indigenous people got screwed both financially and environmentally.

If this scheme sounds familiar, it is because it is exactly the same formula endorsed by our federal student loan program. A large bank, on behalf the government, gets a naive 18-year-old to sign a contract. The forecast is a set amount of years of school followed by a good job and a few years of paying it back. Yet how many Americans are well into their adult lives and still paying down their debts, feeling shackled to their monetary commitments? I myself graduated from a four year college with around $37,000 worth of federal student loans. It has been eight years since I graduated and I currently owe over $41,000 due to the accruing interest. Part of the problem is that I graduated with degrees in Theatre and Creative Writing and have been unable to earn any income in my desired fields. I work at a restaurant, similar to many creative types of people, and my annual take home after taxes is somewhere in the ballpark of $25,000. (Of course, what I actually make is closer to $36,000 a year, but the government makes sure to take it’s one-third of my paycheck in taxes.) The point I’m trying to make is not about fairness. I signed the contract and I am doing my best to pay it off, even if it takes me the rest of my life. The point I want to make is that it simply doesn’t have to be this way. At the end of 2019, the federal debt was just under twenty-three trillion dollars. The entirety of student loan debt is around one and a half trillion. If the Fed can print three trillion dollars in stimulus money in response to Covid-19, then they can take on the student loan debt as well and free us all from this burden. Or think about all of the biggest corporations in the country, like Amazon, Apple, and Walmart. None of these companies pay taxes to our government. If they did, that money would be more than enough to cover the cost of college for everyone, in addition to probably funding health care for all. Or that money could go towards social projects for underserved communities. But the government and Big Business have made their deals and they continue to get richer while the rest of us simply try to remove the boot of debt from our financial necks.

All of these nefarious practices started in the aftermath of the Second World War. With Europe in ruins, the United States and the Soviet Union emerged as the two big powers on the planet and the Cold War was under way. All of a sudden it was capitalism vs. communism in every facet of life, in every corner of the globe, and thus our economic hit men were born. The United States used its propaganda machine to instill a fear of communism in its people and to justify its capitalistic pressures on the rest of the developing world. In Ecuador, for example, they wanted to exploit the people for their oil supply. They got the contracts signed, the power plants built, the oil exported, and all the while kept the country in debt and its people in poverty. That is just one of dozens of examples.

If a country’s leader refused to sign these contracts, they were forcibly removed. This happened in Panama when the CIA assassinated their democratically elected president Omar Torrijos in 1981 so they could take control of the Panama Canal and profit off the shipping shortcut. They put a dictator in charge, and when that guy didn’t work out, the US Air Force bombed Panama City, kidnapped the new president, and the CIA imprisoned him in America. They put yet another guy in charge, and have continually gone to drastic measures in order to keep control of the canal and profit off the shipping route. Meanwhile the people of Panama remain in penury. This same tactic was most recently seen with the execution of Saddam Hussein. The governmental propaganda machine targeted Muslims and stoked people’s fear of Islamic terrorism emanating from the Middle East. However, the real truth is that Hussein was not cooperating with the political demands of the United States. So we had him removed from power.

For further examples, in 1954 the CIA assassinated Guatemala’s democratically elected president Jacobo Arbenz. In 1973 they assassinated Chile’s democratically elected president Salvador Allende. They got Jaime Roldòs, president of Ecuador, in 1981. The list goes on and on, including Haiti, Argentina, Brazil, Nicaragua, El Salvador, Colombia, and Honduras in the Western Hemisphere. It also includes Egypt, Iraq, Iran, Saudi Arabia, Indonesia and more. The Presidents who managed to keep their lives became pawns on the global economic chessboard, the kings of which are the aforementioned conglomerate of international corporations, international banks, and governmental organizations.

While all of these forces used to predominantly be at play internationally, they have more recently come home to infect the United States. The poorest amongst us are oppressed by any and all forms of debt, including student loans, medical bills, credit cards and more. Whereas once upon a time communism used to be our common “enemy,” that has now been shifted to terrorist groups in the Middle East. The most powerful people in the country rotate through different positions in government, business, and banking. Robert McNamara is the perfect example. He started his career at Ford Motor Company in the 1940s and eventually rose to become its president in 1960. From there he transitioned to Secretary of Defense under John F. Kennedy and played a major role in the US involvement in the Vietnam War. He then transitioned again and served as the president of the World Bank for thirteen years. You can clearly see that he was able to convince his friends in the government to give his friends in business tax breaks. You can see how he would be inclined to give his friends low interest rates on loans from the World Bank. He is one small example of a system that rewards those on the inside track and ignores those on the outside.

What we are left with is what Perkins describes as a death economy and he ends his book by advocating for a global change of consciousness. We need to move away from the practices of corporate greed and towards a new philosophy of compassion, humility, and generosity. He writes: “It isn’t about changing the mechanics of economics. It is about changing the ideas, the dogmas that have driven economics for centuries: debt and fear, insufficiency, divide and conquer. It is about moving from ideas about merely being sustainable to ones that include regenerating areas devastated by agriculture, mining, and other destructive activities. It is about revolution. The transition from a death economy to a life economy is truly about a change in consciousness—a consciousness revolution.” 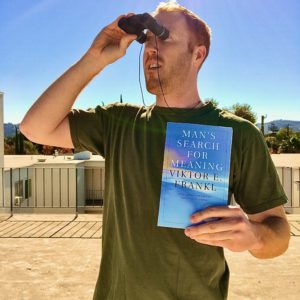 This is exactly the right book to read during the coronavirus pandemic of 2020. Viktor Frankl was a prisoner of multiple Nazi concentration camps and, although our conditions are not nearly as dire, most of us have felt like prisoners in our own homes for at least some period of time this year. With that correlation in mind, this book offers many great insights into why we should continually get out of bed in the morning. I myself have been out of a job and quarantined for over nine months. I have seen some friends descend into overwhelming anxiety and depression and have seen others take wonderful advantage of their new found time. “Even though conditions such as lack of sleep, insufficient food and various mental stresses may suggest that the inmates were bound to react in certain ways,” Frankl writes “in the final analysis it becomes clear that the sort of person the prisoner became was the result of an inner decision, and not the result of camp influences alone.” We become the person we tell ourselves we are.

This book is all about finding and choosing to actively pursue a life of meaning. Dr. Frankl is a psychiatrist and psychoanalyst who is widely credited with establishing the field of logotherapy (from the Greek word logos meaning “reason”) as a psychiatric technique that uses existential analysis to help patients resolve their emotional conflicts. According to logotherapy “we can discover this meaning in life in three different ways: (1) by creating a work or doing a deed; (2) by experiencing something or encountering someone; and (3) by the attitude we take toward unavoidable suffering.” This was how he survived the Holocaust, and how we can learn to find our own meaning in times of perceived meaninglessness.

When he was arrested in 1942, Frankl had a partially finished manuscript that he was forced to leave behind. On those days when he felt apathy creeping in, he reminded himself of his desire to someday finish the book, and this purpose towards the future motivated him to keep going. Also when he was arrested, so was his family and pregnant wife, and similarly on those days when he felt supreme despair, he thought of his loved ones and found purpose in continuing on with the hope of someday reuniting with them. “It is a peculiarity of man that he can only live by looking into the future” Frankl contends, and further writes of his time in the camps that “the prisoner who had lost faith in the future—his future—was doomed.” It seems true to me that without something promising to look forward to, despair at one’s current situation quickly sets in.

One of the messages in this book that resonated most with me was the sentiment that the meaning of life must come from inside each individual and be unique to them. There is no all encompassing meaning of life, but each of us has our own meaning that we are meant to discover and pursue on our own. We must all make choices about the people we want to be and the people we want to become. Having a sense of meaning and a true purpose in life is like having an existential North Star. As long as every choice, big or small, points in the direction of your North Star, you will never be lost in life.

Find your North Star my friends.