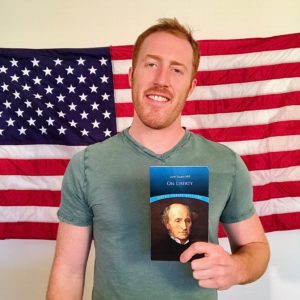 Liberty is something we in the western world take for granted these days, and it’s important to remember that humankind was not always so generously geared towards personal autonomy. Published in 1859, Mill was at the forefront of political science and philosophy thinkers when he proffered his ideas on the subject. “Over himself, over his own body and mind, the individual is sovereign,” he writes.

Once we move past this initial foray into the principles of liberty, Mill furthers his offered opinions. He warns us about the oppression of the ideals of the majority towards the minority. These ideas can be captivating, sometimes to the point of detriment. We can see it in society today, how so many of us find opposing ideas (especially political ones) truly intolerable. If we have progressed to a point in society where we accept other people’s religions and sexualities, why do we struggle so much to accept different ideological points of view? On this, Mill says that “There is no parity between the feeling of a person for his own opinion, and the feeling of another who is offended at his holding it; no more than between the desire of a thief to take a purse, and the desire of the right owner to keep it.” I find this sentiment to be alarmingly true, and may we ring all the bells in the land with its message.

The truth is that there is a necessity for opposition to ideas. That is how shaky ideas become strong or how weak ideas are proven anemic. There is tremendous danger in relegating popular ideas to the forefront of public opinion and vilifying opposition. The best ideas are the ones that have continually stood the test of time, repelling opposition not with crushing force, but with uplifting power. For example, ancient tribes used to sacrifice human lives to the Gods for the hope of a better harvest. As civilizations grew, they eventually decided life shouldn’t be ended so simply. Death then became a punishment for wrongdoing, and over the course of centuries slowly transitioned from barbaric to (relatively) humane. Eventually, as a more modern society emerged, we came to condemn the taking of human life with more frequency, until now it is a rarity. History shows us that the acceptable reasons for ending a human life has been a debate for the entirety of humanity. The reason we live in a world today where you don’t lose your life for stealing a sheep is because enough people, over time, spoke up and said it was a bad idea, preferring alternative punishments. This is but an example of how different opinions on a single subject are required to continually clash and debate as to what is most correct. Here we see the good idea (valuing human life) winning over the bad (seeing human life as insignificant) due to the trials of time and ideological combat.

By today’s standards, much of what Mill writes would be considered Libertarian ideology. Basically, get the government and any oppressive bodies of influence out of the individual’s life. The only exception is when an individual would bring harm to another. This is where the government would have an obligation to step in, ultimately in the pursuit of a safer society for all.

One of the areas that becomes grey is the relationship between parents and their children. Parents have a moral obligation to raise their children to the best of their ability, but what happens if a man has no desire to be a part of his child’s life. Can society demand that he participate against his will? What about a contrary case study with a parent who is raising a child to be an abomination. Does a ruling body have authority to step in and violate the liberty of the parent on behalf of the wellbeing of the child? The answers are tricky and each scenario must be evaluated case by case. Even still, decisions made cannot be assured with one hundred percent certainty and approval from all parties. Hopefully, over time and continual debate, humanity will continue to get better at solving this age-old dilemma.

This balance between societal prosperity and personal liberty is constantly teetering back and forth. It is the crux at where we live. Something I think important to remember, phrased quite eloquently by Mill, goes like this: “In the human mind, one-sidedness has always been the rule, and many-sidedness the exception.” Essentially, if we want to keep our balance as a society, it is important to hear and understand people’s differing ideas. Only with this mutual respect for each other’s ideological liberties can we continue to move forward collectively. 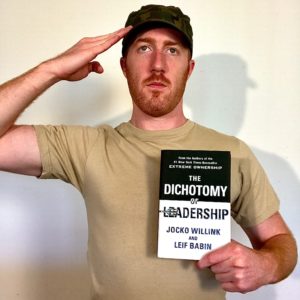 Leadership is inherently difficult. It requires tactical nuance, dedicated attention to your team members, and a never ending desire to improve. Countless books have been written on the subject and many more are destined to follow. What makes this one unique is that it was written by two men who learned leadership in the fire and chaos of war.

Although this book is called The Dichotomy of Leadership, it is really about the dichotomies of life. There is a balance to everything in life, and through the lens of leadership, we can study some important aspects of it. Like when to be aggressive and when to be cautious, or when to be resolute and when to be flexible. The dichotomies are complex, but the lesson is simple. All leadership qualities exist on a scale and it is the leader’s job to determine where on the scale he should place his response to any given situation. Every decision made is unique to its context and none should be passed over lightly. The details are always important, especially in war, where lives are literally at risk. What better way to learn leadership (or anything, really) then with the highest of stakes?

An important point not expressly stated in the book, but intrinsically alluded to, is that there are no steadfast rules. This may come as a surprise seeing as this book was written by military men, and the military is known for its Standard Operating Procedures, but the knowledge between the written lines is clear. In nearly any and every capacity, in both leadership and not, rules should be interpreted more as guidelines. What is imperative, is the knowledge as to why the rule is in place. Only then can you understand when it is appropriate, even necessary, to break it. For example, the military has a specific method for entering and ‘clearing’ a house of enemies. Why is this important? So that nobody gets killed. However, if the leader goes right along with the train of men, then he may find himself stuck in one room while the action is suddenly taking place in another. How is he going to make a decision to help his team if he isn’t present? In this situation, the leader must break the rules of formation and go help his squad. His ability to improvise in the moment is critical. For another example, take a company that utilizes a large force of sales callers. They are all expected to memorize a script in order to funnel their prospective buyers towards a purchase. Why is this important? So the company makes sales and earns a profit (and also so the individual sales callers earn their commissions.) But what if the buyer on the line makes a joke and the conversation takes an unexpected turn? The rules would say that the representative should pull the reins back to the script. Anyone who actually does the job will tell you the connection to the buyer is the most important thing, and would perhaps respond with a joke of their own and allow the conversation to meander off script for a while. Again, the ability to improvise in the moment in imperative. The lesson is that no two scenarios in life are ever the same, regardless of whether you’re on the battlefield, in the office, or anywhere else. It makes sense then, that every situation should be handled differently. It is therefore important to learn the rules, follow them, and yet also know when to deviate in order to achieve the desired success. This is the true dichotomy of leadership, and, in essence, the most important dichotomy of life.

Another significant take away from this book was the importance of humility in a leader. In his chapter on humility, Leif writes: “Leaders must be humble enough to listen to new ideas, willing to learn strategic insights, and open to implementing new and better tactics and strategies. But a leader must also be ready to stand firm when there are clearly unintended consequences that negatively impact the mission and risk harm to the team.” Another leader I am quite fond of, famous for his humility, comes to mind. That man is George Washington, one of the most historically respected leaders in history. Ego is indeed the enemy (just ask Ryan Holiday) and everyone, leader or not, needs to keep theirs in check. Many of the ‘rules’ in this book are similar in that they are applicable to all people, not necessarily just those in leadership positions. Although being humble makes for a good leader, it also makes for a good individual. Any person who can take criticism constructively and work to better themselves is a person of strong moral character.

The only part of this book that frustrated me was their purposeful redactions. Due to their desire to keep specific companies anonymous, a lot of details are left out and banal words like “company” and “procedure” are used to nauseating boredom. I appreciate wanting to respect privacy, but I think in this instance it came at the cost of being interesting. The details are what make a story pop! Of course, these guys aren’t writing a story – they are relaying information. And for that purpose, this book is exquisite.